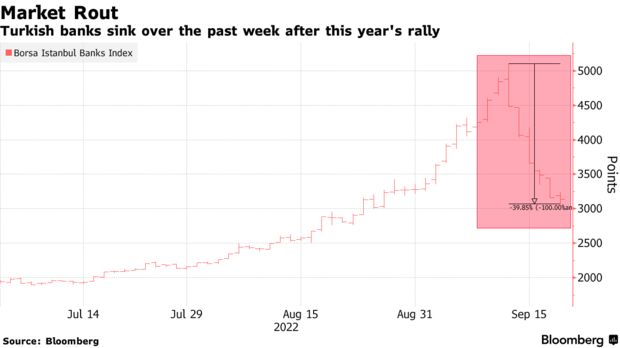 Key Turkish banks are buying back shares after stocks reversed an unprecedented rally last week, providing relief for brokerages hit by the rout.

“It’s a way of banks making a statement that they will defend their investors,” Marmara Capital’s Haydar Acun said. “But I believe it’s also a step that is intended to offer some relief to brokerage houses which were forced to execute margin calls.”

Turkish stocks fell Wednesday morning, following Asian equities which were all in the red as Russia stepped up its war in Ukraine, although declines were a far cry from the moves seen during the past week’s rout. The Borsa Istanbul Banks Index opened 1.2% lower and the benchmark Borsa Istanbul 100 index was down 0.9% as of 10:32 a.m. local time.

Banks have led the week-long rout that already wiped more than $12 billion off listed lenders’ market value, dragging the main index lower as much as 12% from an all-time high.

The sudden reversal came after a two-month rally that saw bank equities rise around 150%. The rout was triggered by a worse-than-expected inflation data in the US and Akbank Pensioner Fund’s sale of Akbank shares on Sept. 13 and quickly spiraled amid mounting margin calls. They occur when investors are required by brokerages and regulators to add equity at times of sizable market moves.

Following an emergency meeting on Monday night, authorities said the current market turbulence didn’t merit an immediate intervention and that some brokerage houses would have to accept losses. But Turkey’s main custodian bank said on Tuesday that it would relax parameters used to calculate collateral needed for margin trading on nine of the worst-hit stocks.

In the meantime, Halkbank bought back its shares in a price range of 8.06 liras to 8.58 liras, compared with a peak of 16.64 liras on Sept. 13 and a 200-day moving average of 5.6 liras. The Isbank staff foundation, managed by current and former employees of the lender, bought 5 million shares in a range of 8 liras to 8.19 liras.

The reversal in Turkish equities spurred a rise in margin calls, prompting the Monday’s extraordinary meeting between the regulators and brokerages. Calls on margins surged to 1.8 billion liras ($98 million) on Thursday. That amount was a record, based on Takasbank data going back three years. By yesterday, calls on margins had more than halved to 862 million liras.