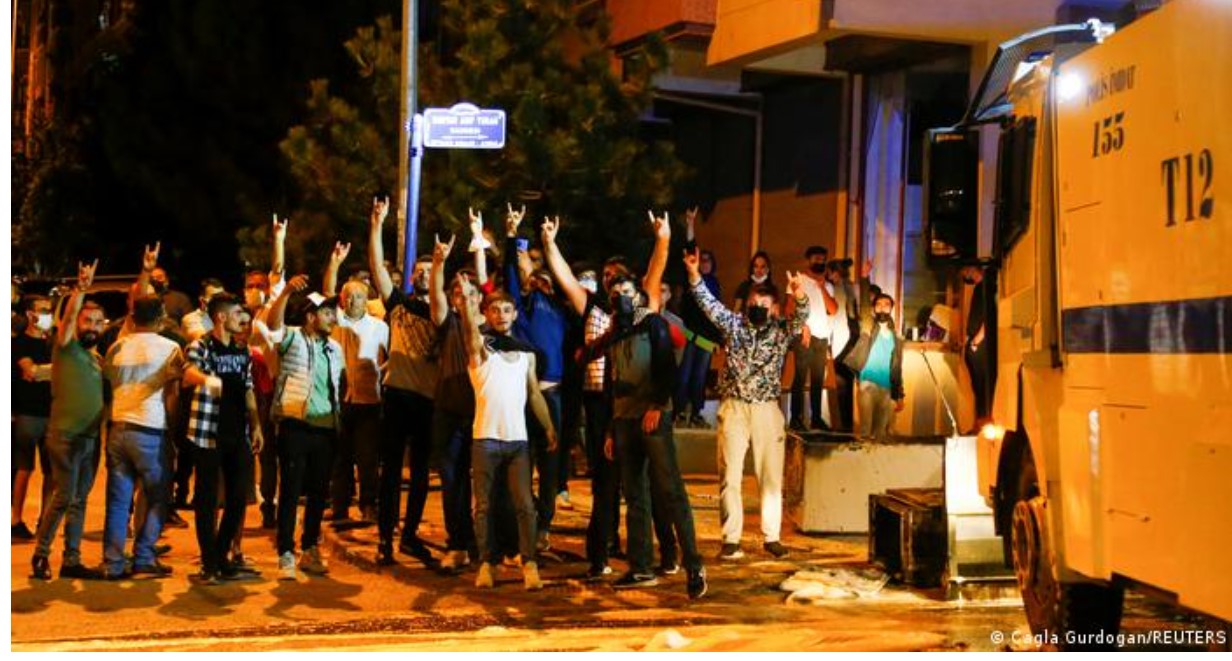 It all began on Tuesday evening when a street fight erupted between two groups of youths in Altindag, a district of the Turkish capital, Ankara. In the violent confrontation between some Syrian migrants and a group of Turkish locals, two Turks were stabbed. A few hours later, one of them, 18-year-old Emirhan Yalcin, died in hospital.

The event sparked a wave of xenophobia that resembled a pogrom. On Thursday night, hundreds of people poured onto the streets of Altindag. There, they vandalized and ransacked stores, homes and cars belonging to Syrian immigrants.

These ugly scenes could be followed live on Twitter: Numerous videos were posted on the social network showing the angry mob vandalizing Syrian property and shouting xenophobic slogans. Some of the rioters make the so-called “wolf salute” with their hands, the symbol of Turkey’s right-wing extremist movement “UIlkucu,” also known as the “Gray Wolves.”

In as much as video evidence and interviews with angry protestors demonstrate the events are impromptu and largely the doing of nationalists hotheads, both the Turkish and world media blamed the opposition:  “The recent tensions between locals and Syrian migrants in the capital Ankara’s Altındağ district was a planned incident for provocation, said Cavit Etleç, who has made a name for himself after helping hundreds of Syrian refugees” claims pro-government daily-Sabah.

A more realistic interpretation of events is the prolonged economic and monetary crisis since the fall of 2018. This difficult situation has amplified existential fears in Turkish society and struggles over the distribution of wealth.  AKP sources claiming Syrian and Afghan refugees are a source of cheap labor have not helped ethnic tensions.

Deutsche Welle reports:  “The xenophobic riots in Ankara came as no surprise to sociologist Ulas Sunata. She says they cannot be attributed solely to the bad economic situation. “Tensions between refugees and locals were never properly defused,” she explains. “There have been a lot of mistakes in immigration policy. It was non-transparent and poorly communicated.”

Rumors of President Erdogan having cut a deal with President Biden to accept up to  1 mn Afghan refugees and the economy set to slow down after the departure of tourists in 4Q2021, it is certainly to be feared that a nation-wide social eruption is in the making.

At the end, Turkey may re-live 2013 Gezi protests which shook the country to her roots. Wikipedia explains Gezi   protests:

A wave of demonstrations and civil unrest in Turkey began on 28 May 2013, initially to contest the urban development plan for Istanbul’s Taksim Gezi Park. The protests were sparked by outrage at the violent eviction of a sit-in at the park protesting the plan. Subsequently, supporting protests and strikes took place across Turkey, protesting against a wide range of concerns at the core of which were issues of freedom of the press, of expression and of assembly, as well as the alleged political Islamist government’s erosion of Turkey’s secularism.