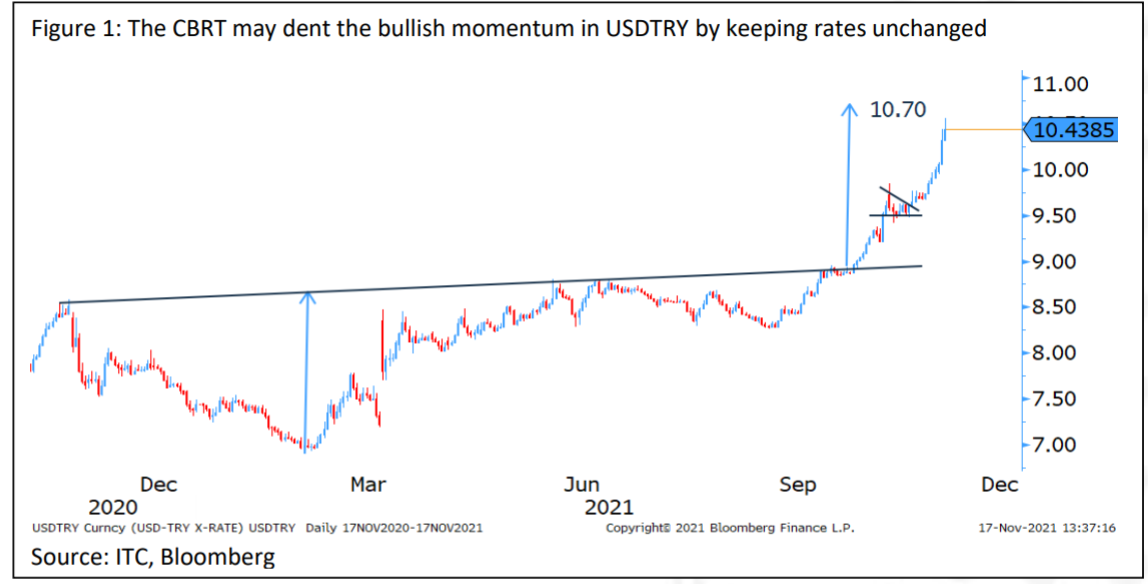 Turkey’s central bank is widely anticipated to trim interest rates further on November 18 despite the precipitous fall in the value of the lira to yet another record low and the surge in inflation to almost 20% YoY.

The consensus expectation is for a 100bps cut to 15%, according to a Bloomberg’s survey. This is not based on economic reality as inflation is four times above the official target and unlikely to fall substantially in the coming months if not quarters. The best way to explain why the CBRT is in an easing mode is that Governor Kavcioglu puts to the test President Erdogan’s unorthodox view that high interest rates are the cause of inflation. A day before the central bank meets President Erdogan vowed to “lift the interest rate burden from citizens.”

The CBRT, however, may have to pause this monetary policy experiment and keep the policy rate unchanged after the selloff in the lira accelerated. One could argue that Turkish policy makers have a relatively high tolerance for a weaker currency these days. That said, the lira has lost almost 29% of its value versus the dollar and more than 23% versus the euro year-to-date (at the time of writing). Allowing the currency to sustain even heavier losses will have serious negative consequences. These include high inflation being prolonged, inflation expectations de-anchoring even further and fostering dollarisation. It could all culminate in a balance of payments crisis.

Using rational arguments when assessing the outlook for Turkish monetary policy has not always worked in the past. However, cutting rates further could be too risky and counterproductive as it would leave the lira more vulnerable against the dollar supported by market expectations that the Fed may start raising rates as soon as in the middle of 2022 due to rapidly rising inflation in the US. The CBRT does not have sufficiently  strong credibility to impose its view on the market and narrow the interest rate differentials without potentially causing a full-scale currency crisis.

It is also worth noting that the CBRT already hinted that it may pause the easing cycle stating back in October that “(..) till the end of the year supply side transitory factors leave limited room for the downward adjustment to the policy rate.” Admittedly, this may well mean that the CBRT opts for a small cut, but even a 100bps move or less than that could prove fatal for the lira.

In terms of market reaction, a corrective pullback in USDTRY is likely to unfold if the policy rate is left unchanged. Such a correction should be seen as temporary within the parameters of the well-established longterm bullish trend in USDTRY underpinned by persistently high inflation, unbalanced GDP growth, strained relationships with Western allies and geopolitical risks. The market would also likely start to speculate relatively quickly that Governor Kavcioglu’s term could be cut short by President Erdogan who abruptly dismissed three governors in less than two years.

Another rate cut would keep USDTRY on track to extend its already impressive gains further towards the 10.7000 target obtained by measuring the distance between the February low and the trendline resistance

that capped gains until the bullish breakout in October.