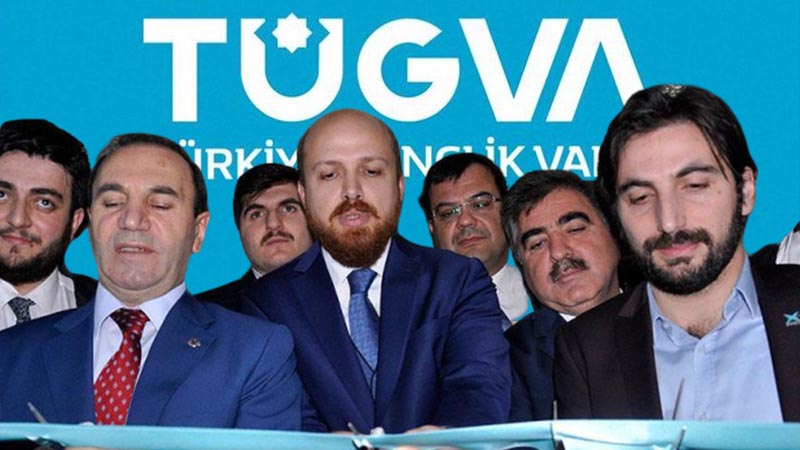 • A journalist shared documents allegedly leaked from TÜGVA, a foundation of which President Erdoğan’s son is among the founders

• The documents include lists of people to be placed in state institutions, including the judiciary, ministries and security forces

• Recently, TÜGVA refused to leave a building belonging to the İstanbul Metropolitan Municipality despite a court order

Journalist Metin Cihan yesterday (October 12) published documents that he said were leaked to him from the Turkey Youth Foundation (TÜGVA), a foundation with close ties to the government.

Among the documents, there are lists of people to be appointed in state institutions, including the Turkish Armed Forces (TSK), The General Directorate of Security, the Ministry of Justice and judicial institutions.

TÜGVA executives and Mahmut Kaçar, a former MP of the ruling Justice and Development Party (AKP), provided a reference for the listed people to be appointed, according to the documents.

Journalist Cihan said the working system of the TÜGVA was similar to that of the Fetullah Gülen group, an Islamic movement formerly allied with the AKP. Widely accused of infiltrating state institutions, the group is currently designated as a “terrorist organization” and labeled as a “parallel state structure.”

“If I had made a newspaper report on the TÜGVA documents, I would have titled it ‘Parallel state structure’,” the journalist wrote on Twitter. “A known story, a new season. The TÜGVA version.”

Also, public land and properties were irregularly allocated for TÜGVA and other organizations, Cihan said, citing the documents.

“The structure is not limited to TÜGVA. For example, seven groups hold a meeting for seizing dormitories,”wrote Cihan. “There are 821 buildings in the first list and 285 buildings in the second list. While students can’t find dormitories to stay, the existing buildings were distributed to these groups.”

Along with TÜGVA, the Women and Democracy Foundation (KADEM), İlim Yayma Cemiyeti (Society for Spreading Wisdom), and the Ensar Foundation are seen in the documents.

“Taxes go to TÜGVA as well. Through municipalities and governorships, public resources are transferred to this structure. We can see this clearly in the file titled ‘Financial support report’,” said Cihan.

Releasing a statement after the revelations, TÜGVA Chair Enes Eminoğlu said the documents were fake.

“TÜGVA is not the only target in this plot. All of our foundations and associations that serve national and spiritual values are on the target,” he said. “Shared documents are created, forged documents. If they have documents, they should deliver them to the country’s prosecutors.”

On October 4, TÜGVA refused to leave the second floor of a ferry port on İstanbul’s Büyükada island despite a court order. Police officers surrounded the building to prevent the İstanbul Metropolitan Municipality (IMM) from evacuating the building.

In 2018, the building was loaned to TÜGVA by the previous municipal administration, which was led by the AKP, for only 2,000 lira (221 USD).

About this incident, the TÜGVA chair said, “As TÜGVA, we have faced massive unlawfulness and slanders since October 4. After the lies and slanders of the CHP [main opposition Republican People’s Party] and the IMM of the CHP failed, they started to spread bigger lies,” he said. “Because the CHP and the IMM are illegal, invaders and marauders. We have faced a new all-out attack.”

Workers Party of Turkey (TİP) Chair and MP Erkan Baş said, “If these allegations are true, then we are facing a new parallel state structure.” He called for a parliamentary inquiry into the revelations.

It was founded in 2014 with the slogan “Future of Youth, Youth of Future.”

Bilan Erdoğan, the younger son of President Recep Tayyip Erdoğan, is among the founders and a member of the High Advisory Council of the foundation.

TÜGVA was dubbed as the “youth organization of the AKP” as Bilal Erdoğan and AKP politicians frequently attended events organized by it. The president had alao attended the opening ceremony of the foundation’s headquarters in İstanbul.

The chair of the foundation, Enes Eminoğlu, is known to be a friend of Bilal Erdoğan.

TÜGVA defines its mission as “educate people who are culturally, artistically, athletically and spiritually equipped and conscious.”

It has more than 340,000 members and offices in all 81 provinces in the country, as well as in 404 districts. It also has 58 university dormitories in 40 provinces.