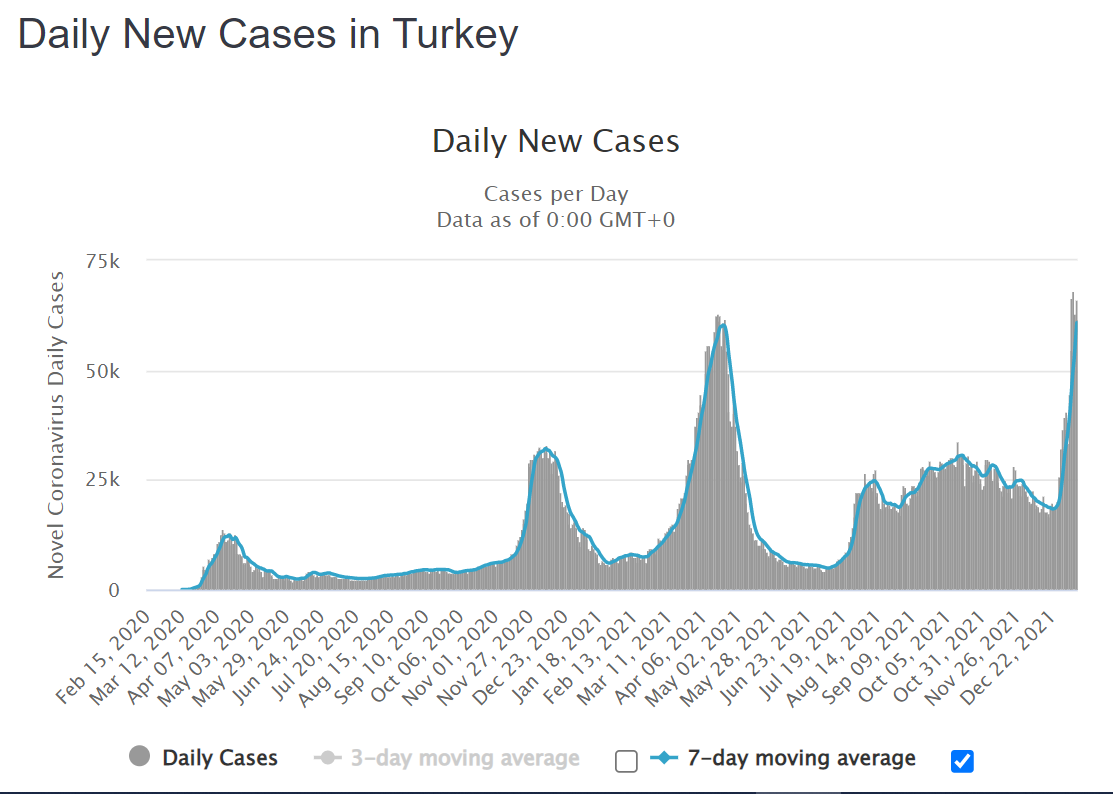 Turkey’s most populous city of Istanbul has become the epicentre of the Omicron variant of COVID-19, Health Minister Fahrettin Koca said on Sunday, when the country registered over 61,000 new infections.
Over the past three weeks, there has been a 6.2 percent increase in hospitalisations in Turkey, the country’s top health official said on Twitter, noting however that there was no notable increase in intensive care unit or intubation cases.
Turkey on Sunday registered 61,727 new COVID-19 cases and 173 deaths amid the fast-spreading variant, according to Health Ministry data. As many as 384,149 COVID-19 tests were done in the last 24 hours, with 61,727 positive cases, the ministry said.
Turkey on Wednesday reported its highest number of daily COVID-19 infections since the start of the pandemic at 66,467 as the rapidly-spreading omicron variant takes hold.
Over 83 percent of the Turkish population over the age of 18 has received two coronavirus vaccinations, according to a map shared by the ministry on Sunday, with over 21 million having received booster shots.
Last month, Turkey began administering its domestically developed COVID-19 vaccine, Turkovac, amid a rapid surge in Omicron variant cases.

But a number of the country’s top health figures have warned against its, use, citing lack of completion of its study.
Turkovac was granted emergency use authorisation on Dec. 22, removing the need to provide publicly available full verification of its safety and efficacy, and mass rollout began on Dec. 30.

Turkish Medical Association chairwoman Şebnem Korur Fincancı took to Twitter on Saturday to say that the vaccine had not even completed its phase 3 studies, which should take two more years. Fıncancı, along with others, have urged for the urgent public release of partial data from studies that have already been conducted.